Acceleracers began development in February 2004,[1] with animation being produced from June 2004 to June 2005.[2] Concept designs for vehicles may have began as early as late-2003, according to Hot Wheels vehicle designer Eric Tscherne.[3]

Several storyboards were drawn by David Earl,[4] Marlon Deane,[5] and others in early to mid 2004.[6] The storyboards by David Earl show early designs for the the Racing Drones and Karma Eiss.

Early Drones designs, shown in a storyboard for Ignition.

Early Karma Eiss design, shown in the storyboards for Ignition.

Several design documents about realms and locations from Acceleracers were released by Casey Kwan on March 22nd[7][8] and March 24th[9][10] of 2008 on Flickr. The earliest date specified for the documents is from November 14th, 2004.[11] The full documents can be viewed in Casey Kwan's flickr

Going by several production photos, the modeling stage of Acceleracers began around July 2004.

An Acceleracers test animation was made by DQ Entertainment LTD. around the beginning of 2004. Several of the music and sound effects ended up in the final series. A beta design for the Acceledrome and Reverb was modeled and animated, along with an early Water Realm. Also shown is the driver of Reverb as Mark Wylde.

The test animation and images were released by Madhusudan Yeluguri on February 24th, 2012. He was responsible for the compositing, color correction and VFX within the test animation.[12] None of the 3D assets produced made it into the final films.

The original title for the series could have been XL Racers, judging by an early packaging design. Hyperpods also were initially titled "Power Pods".[13]

Another early name was Realm Racer(s), showing up on a beta Swamp Realm toy set box-art,[14] British Columbia Film Commission documents,[15][16] and Racing Drones concept art.[17] At this point of the naming process, it would’ve been a subtitle to Highway 35, as “Highway 35: Realm Racers”, much like “Highway 35: World Race”. It seemed to have been dropped in favor of naming it as a separate series.

An early Acceleracers packaging can be seen on some international Amazon sites,[18][19] featuring an early logo design and Vert Wheeler, Kurt Wylde and Taro Kitano artwork from World Race.[20]

Art director Alan Andrews was hired as Senior Designer for the Hot Wheels brand.[21] Alan integrated still images from the animations and create a packaging for the DVDs. He was also designed the speedometer-style prints on the DVDs.[21] 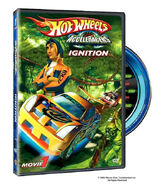 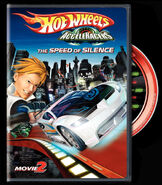 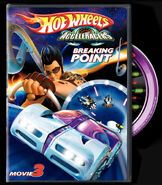 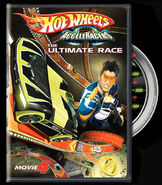 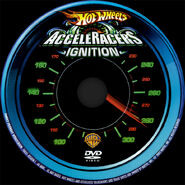