The Ultimate Race
Accelium is a car that is part of the Silencerz lineup.

It makes it's first appearance in the Breaking Point intro where it is molded from the strange metallic liquid that the Silencerz use to ready all of their cars. The next time it makes an appearance is at the end of the Neon-Pipeline Realm, it is in the line with all of the other Silencerz cars that follow Magnesium through the portal. The next time it is seen is in the Junk Realm. It can be seen deactivating its Invisibility and joining Anthracite to help defeat the Junk Monster. It is seen again with Vert when the track merges back together disguised as Kurt Wylde's Battle Spec. It then undisguised itself and revealed it's identity to Vert, before attacking his car with an EMP Blast. It then overtakes him, but crashes when the car is struck by a swinging wrecking ball. The car is hurled off of the track, and the driver uses the Silencerz EDR device, and the driver and the car are teleported back to the Silencerz HQ, joining Anthracite, which was forced to teleport back when his car was thrusted off the track by the Junk Monster earlier in the realm. At the end of the Junk Realm, Accelium can be seen alongside the other Silencerz vehicles that are lined up in the Silencerz HQ. Accelium's last appearance is at the end of The Ultimate Race when the Silencerz flee from the exploding Acceledrome. It is driving way alongside Covelight and a few other Silencerz vehicles. 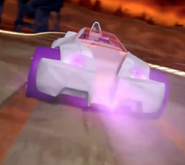