The Ultimate Race
Anthracite is a car belonging to the Silencerz team. It is driven by an unknown member of the Silencerz.

It makes its first appearance in the Neon Pipeline Realm where it races with all of the other Silencerz cars. It can be seen at the end of the realm following Magnesium with the rest of the team. It then appears again in the Junk Realm and is totaled when it is hurled off the track by the Junk Monster. The Driver uses the escape device built into the car and Anthracite along with its Driver are teleported back to the Silencerz HQ. It appears a final time in the Cosmic Realm where it finishes the race with Covelight to win the Cosmic Realm Accelecharger. 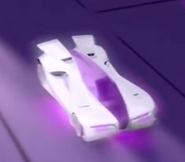