Banjee is wise-cracking and courageous, his expert sense of direction in the Puerto Rican forests made him the perfect leader for the Roadbeasts.

He wears a yellow Roadbeasts jumpsuit with gray pieces.

Banjee can first be seen in Tezla's complex. His first speaking role is "sweet" while testing his car's ability. Banjee is one of the ten drivers in the first leg, he didn't believe Tezla about the fact when a car opens a portal after reaching 300mph. In the leg, Banjee is surprised with the leg's rocks, he then later gets passed by Kurt Wylde. Banjee passes four cars to 1st place. A loop caught his attention while driving and tried to do an attempt but his car wasn't fast enough so he fell off the loop. When Vert Wheeler uses his jump jets in mid-air, he spectates him surprised. Banjee passes Vert and Taro Kitano along with Kurt Wylde and Brian Kadeem. He and Kadeem race into a thick cloud of black smoke far behind from Kurt. Kurt comes out of the smoke as Zed-36 and throws a bomb next to the track. The bomb explodes afterwards he and Kadeem pass it. Vert manages to catch up along with him but Vert turns back to save Lani Tam after she alarmed him, possibly making him finish in third place. After the leg, Banjee was given the opportunity to lead team Road Beasts.

Banjee was able to return to the first leg to practice run two new Road Beasts drivers, Skeet and Esmeralda Sanchez. Dr. Tezla seems disappointed with Banjee for doing that. Banjee is one of the twenty-two drivers in the second leg.

Before the events of Acceleracers

Before the events of Acceleracers Ignition, Banjee was called upon by Dr. Tezla to race in the Racing Realms. His vehicle Ballistik can be seen crashed in the Swamp Realm. However, the Silencerz were able to rescue him through unknown methods. Shortly afterwards he joined the Silencerz and helped them complete several of the Realms.

Banjee racing with his helmet on.

Banjee as a Silencer in his action figure form.

Banjee in the Neon Pipeline Realm. 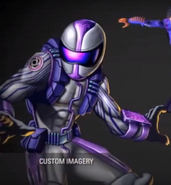