"Yo, let's pump up the Bassline!" - Shirako Takamoto

Bassline is a Teku car driven and owned by Shirako Takamoto. Bassline is likely based on Australian utes. This is supported by the fact that the steering wheel is on the right hand side of the car, like all cars manufactured in Japan.

It was lost in the Cliffside Realm when it was pushed off the track by Kurt Wylde to stop Shirako from using his damaged Nitrox 2 booster, which would have caused the car to explode. However, it was rebuilt, and then used in the Junk Realm. Later it was used in the Cosmic Realm where one of its speakers was torn out by a Sweeper Drone before it was taken in by the controlled Sweeper in order to take it into the Drones' Headquarters to save Wylde. During the rescue, Bassline was overturned by the gunfire of a Drone jet, causing Shirako to abandon it there and "Piggyback" on Porkchops' E.D.R. with Monkey to leave.

Dashboard in the Water Realm 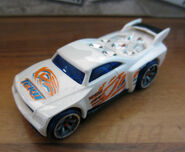