Driving in the dark

Deezel "Porkchop" Riggs
The Cavern Realm was the 3rd realm the humans entered. It is located inside of a huge cave, with stalactites and stalagmites as hazards and obstacles. The track often parts into many different tracks, but then merges back into one track. There are bat-like creatures that dwell inside this realm.

The winner was Porkchop, a member of the Metal Maniacs. 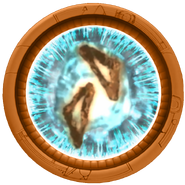