He was lost in an unknown racing realm and some fans believe he is a member of the Silencerz.

He is an adult man with short beige hair, with brown eyebrows, brown eyes, and a soul patch. He wears the purple Street Breed jumpsuit, plastered with graffiti-inspired orange and green designs.

Dan is first mentioned by Mark Wylde after joyriding in Sling Shot. Dan does the PIT Maneuver on Krakatoa in the second leg and makes a five car crash. Taro Kitano and Brian Kadeem get past the crash into first place and finish the leg in a tie.

Dan starts behind Lani Tam before the third leg began.

In Acceleracers, however, he is not seen. Unlike Banjee, not even his car is seen. It is revealed he helped Tezla before the events of Ignition. It can be assumed that he suffered a fate similar to that of Banjee or Kadeem. 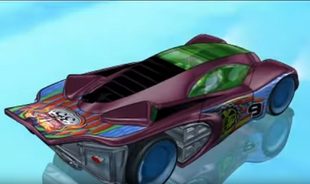