The Ultimate Race
Dr. Peter Tezla is a former member of the Silencerz, the founder of SCRIM Corporation and the organizer of the World Race. He has a robot companion named GIG who assists him. He is voiced by Michael Donovan.

Dr. Tezla is an older man with silver side-swept hair, a goatee, and purple sunglasses. He wears a purple suit and purple pants. In Acceleracers, he wears a metal exoskeleton over his suit.

He is level-headed and intelligent, though he can also be short-sighted, not realizing the consequences of keeping the Wheel of Power in his possession until GIG was damaged.

In Acceleracers, he would become very mysterious and secretive, often lying to the drivers for his own gain. He only gives out information if he feels someone needs to know it. Because of this, Kurt Wylde is very distrustful of him. He is borderline obsessive over the world of the Accelerons.

Peter can be first seen in Deora II's screen after he recruited Vert Wheeler to the World Race. Tezla explains the car's equipment to handle different terrains and Highway 35's founding history. When ten cars started to begin the first leg Tezla states that any car reaching 300mph will open a portal. After Kurt Wylde wins the first leg, Tezla reminds him that it's just the beginning of Highway 35. Tezla tells Kurt that he can choose five new drivers to race for Street Breed. He states that the other drivers would be recruited and be lead by Brian Kadeem, Banjee Castillo, Taro Kitano, and Vert Wheeler.

Tezla is seen disappointed when he finds out that Banjee brought unrecruited drivers to the first leg. Tezla explains more facts about Acelerons, the ancient inscription that's waiting for the drivers at the end of Highway 35, and the Wheel of Power's powerful source of energy. He later assigns drivers to race in teams to bring him the Wheel of Power. Tezla starts a race of twenty-two drivers and activates the starting drone.

After Taro Kitano and Brian Kadeem tie in the second leg, Tezla tells drivers that they will share the pole position for the third leg. He also believes that the third leg can possibly be the final leg. The next day, Tezla prepares thirty-three drivers for the next leg and tells GIG to start the race.

Tezla later starts the final race, with thirty-four cars competing. He reminds all drivers that the fourth leg will be the final leg. After Vert wins the leg and gives Tezla the wheel of power, GIG reminds Vert that whenever a car reaches 300mph, a portal will no longer open since the Wheel of Power has been removed, which makes Vert furious. Taro and Vert break into Tezla's lab. Tezla uses the Wheel of Power's unlimited source of clean energy. The Wheel's power's energy proved too powerful, and it destroyed many electric circuits in the complex, even GIG. He believes that it probably blacked out North America. He states that he needed the Wheel's energy to benefit humanity, but Lani Tam and Vert tell him that it's too dangerous to have too much power of one person's hands. Tesla later restores power to the complex. Brian Kadeem was heading home when he notices CLYP Robots waiting outside the complex. Gelorum tells all drivers to surrender the Wheel of Power. Tezla tells Vert a writing on the ancient inscriptions "Wisdom is a circle. What you receive, you must give back."

After the World Race, Dr. Tezla continued to study the Wheel of Power until Gelorum and the Racing Drones took it out of Highway 35, but Dr. Tezla pursued them and nearly got himself killed in the process when a Racing Drone jet shut down his car, making him fall down the track and onto the ground. RD-L1 is given the order to destroy Dr. Tezla and promptly tracks him down, finding him and starting to rip Nitrium to pieces. Barely conscious, he presses the E.D.R. and returns to Highway 35 before falling unconscious and getting found by GIG. Failing to protect the Wheel and now with his spine permanently injured, Dr. Tezla feared for his life and built the AcceleDrome, far away from the Drones. He then wears a exoskeleton to get around. 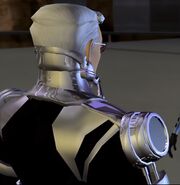