Flathead Fury is a Metal Maniacs car that was Mark Wylde's second car, after Spine Buster.

Beginning construction before Spine Buster was even destroyed, this car was partially seen being built in the Cliffside realm Mini-episode. It appears to be reminiscent of a Dragster, with an exposed cockpit and streamlined design. The car makes its debut in Breaking Point, when Wylde races Tork for leadership of the Metal Maniacs. Afterwards, Wylde uses this car in the Junk Realm, but collides with a spike ball near the end when he doesn't follow the apex, crashing the car. It is not seen again after this, as Wylde is captured by the drones.

In 2014 and 2015, the tooling of the car was updated: the front and rear wing were made plastic 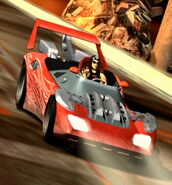