Ultimate Race
The Grappler Claw, also known as a grappling hook, is a piece of technology that allows a driver of a vehicle to attach a rope to objects. Each team has a different hook design.

For the Teku cars and all of the cars used in the World Race, the hook is a 4-pronged metal claw attached by a rope.

The Metal Maniacs version is a sleek, red, arrow-like hook.

The Racing Drones design is a black arrow with green lights, attached by a thin black cable.

It was first created by Dr. Peter Tezla for the World Race vehicles. It was first used by Vert Wheeler’s Deora II.

During the coast race in Ignition, Mark Wylde fired a hook from Spinebuster to stop the car from falling off.

In the Storm Realm, RD-S1 fired a hook at Kadeem’s car, Krazy 8’s. RD-L1 then pushed RD-S1 off the track, sacrificing it for the assumed killing of Kadeem.

After that Vert uses the Deora II’s grapple claw in a failed attempt to save Kadeem from falling into the depths of the realm.

In the Lava Realm, it is used by Vert to save Taro Kitano from falling into lava. 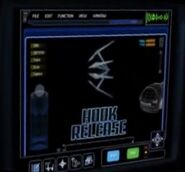 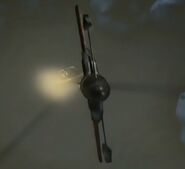