“Experience the insane challenges of real-time 8-player PVP racing while you smash, crash, and stunt your way to victory! Collect legendary Hot Wheels® cars like Bone Shaker™, Twin Mill™, Shark Bite™, Rodger Dodger™ and more while upgrading your fleet to compete in the ultimate racing league.

The game features an alternate futuristic version of Vert Wheeler as a tutorial guide. In the beta, a Teku logo could be seen among the sponsors on his suit, before being removed in a later update with updated art.

If the player subscribes to the Redline Club for the game, the player can race in the Teku skin for the Deora II.

The base skin of Hollowback is of the Acceleracers design.

Acceleracers skins for High Voltage and RD-02 were added in an Acceleracers themed season that lasted from June 21st to July 5th, 2021.

Cars that were originally featured in Hot Wheels: World Race.

Cars that were originally featured in Hot Wheels: Acceleracers. 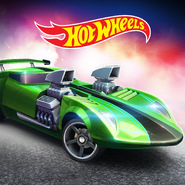 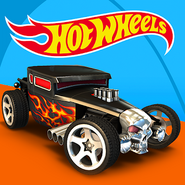 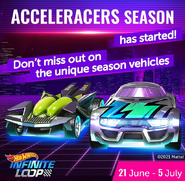