Ice on the road

Silencerz
The Ice Realm is slippery and winding, with some of it's track under the ice. It is the eighth track entered by the humans and the fourth during the micro-sodes. Some of the track goes through piles of snow. It goes through and around hills and valleys of ice and snow.

The Ice Realm is one of the minisodes. The first part is on "The Speed of Silence" and the rest are on "Breaking Point". 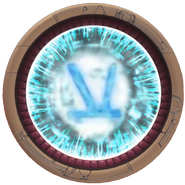