The Ultimate Race
Lani Tam is a Hawaiian woman and former member of the Wave Rippers and now a member of the Acceledrome Crew. She is voiced by Venus Terzo.

She is a young Hawaiian woman with dark brown hair, dark brown lipstick, brown eyes and earrings. She wears a light blue tanktop reminiscent of her Wave Rippers uniform, with gray-ish blue overalls and blue shoes. She wears light blue arm guards and an arm band on her right arm.

She is levelheaded and technologically minded, her innate sense of direction and abilities as a mechanic makes her indispensable to the other drivers.

She grew up around street racers in Honolulu, Hawaii.

Tam is one of the first drivers chosen by Dr. Tezla along with Maximo, Pete Karris, Krakatoa, and Rekkas. She asked Vert that if they should be a team since they both drive Wave Ripper cars. During the 1st leg, Taro drives into lava by using his car's abilities but Lani tried to to the same but she ended up on a rock in lava. She demands help and Taro turns back to help her, same with Vert after thinking that if Taro couldn't. She was saved but she needed a new Chevy Nomad.

Prior to the second leg, Vert introduces Lani to Alec Wood. Lani is one of the twenty-one drivers in the second leg. She asked Mark Wylde that if he has driven a car over 300mph and Mark replied only in his dreams. Lani passes Vert, Alec Wood, and Mark after Mark crashed between Alec and Vert. Lani reminds Vert that the Road Beasts are taking a short cut. Lani, Mark, and Vert take the short cut but Alec stays on the track. Lani, Mark and Vert passed a bridge but when the bridge started to collapse with Vert on, it frightened her. The Wave Rippers catch up to the Road Beasts with a big wheel and a ramp. Lani uses her onboard computer to tell the time when the drivers start. Lani starts the timer for Esmeralda Sanchez to get past. After Skeet got past, Lani goes for it and made it successfully. Mark then goes but only went 158mph. The Corvette Stingray's Nitrox 2 bar falls out and explodes the wheel, causing the speed to go out of control. Lani couldn't tell when Vert and Banjee Castillo to go. Vert and Banjee go for it and got past successfully. The wheel explodes afterwards.

Vert was going to fix his vehicle. When he passed the 1955 Chevrolet Nomad, he finds Lani in the car. When Vert says that she needs some help, Taro Kitano replies "no."

After the World Race, Lani Tam stayed with Dr. Tezla to help. Lani also broke up with Taro Kitano, stating that he was hard to talk to.

She resides in the Acceledrome, where she keeps tabs on the drivers sent into the Realms with communicators and dash board monitors, often guiding them and giving advice to where they need to go. 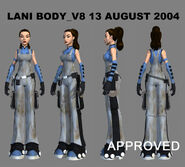