Understanding how heat affects your car

The Lava Realm was the 4th realm the humans entered. This one was the second and last to take place between Ignition and The Speed of Silence. The Drones won this realm. Monkey also took back a racing drone tire that Dr. Tezla later uses to create morphing-tires for the drivers.

Get ready, its going to be a hot one! Especially in this Realm you need absolutely focus over your car. Magma is everywhere and heats up the track, So you need to be aware of your tires and their temperature. Ever tried to drive with overheated tires? Well you can lose control easily with every maneuver and there's a really high chance to fall of the track, into the sea of Lava. So think twice before you drive a shortcut which is near the Lava sea.

With the Lava Realm Accelecharger, your tires become indestructible, which means the heat has no effect, and you don't need to worry about spike traps or your tire wearing out while using this accelecharger. 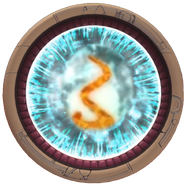