The Ultimate Race
Major Jack Wheeler is Vert Wheeler’s father, husband of Vert’s mother, and secretly a member of the Silencerz. He is voiced by John Payne in World Race and Acceleracers.

Major Wheeler is a middle-aged white man with short, blond hair having grey strands on the sides. He has blue eyes and a square jaw. He wears a blue suit and red tie that is adorned with several military medals, and a name tag titled “Wheeler”.

As a Silencerz member, he wears a white jumpsuit. The suit is styled with purple lining and circuitry patterns. His helmet has a silver base, and covers the face and top of the head in opaque purple glass with bright circuitry.

Major Jack Wheeler is packing items into his car when Vert Wheeler meets with him. He explains he doesn’t have time to stay with Vert at the training center as he has to ship out with his squad and will simply drop him off. Vert expresses his frustration with this, as Jack had promised to do it on his birthday. Disappointed in Vert’s narrow mind, he declares Vert will someday learn the value of teamwork. Jack then drops Vert off at training facility.

Around the end of the World Race, Jack’s squad stands down and he returns home to find a message from Vert about a race. Dr. Peter Tezla and Gig (who Jack repaired[1]) explain the World Race to him. Vert drives to Tezla’s Cube and meets his father there. Jack says he’s proud of Vert’s growth. Jack still grounds him for a month, but not before requesting a test drive in the Deora II. Jack unintentionally activates the Nitrox 2, and enter the portal through Highway 35. Assumedly, they both safely got out of Highway 35.

Major Wheeler’s squadron is called up again and he leaves a note for Vert. After leaving the Acceledrome, Vert returns to his family’s home. Vert is in the driveway cleaning his surfboard when Jack drives back home as he had a few things to pick up. He notices that Vert has brought a new motorcycle, with Vert explaining that his car got banged up. Jack tells Vert to be more careful and Vert is reminded how his mother used to always say that to him whenever he left. Afterwards the two then go inside the house.

Inside their home, Jack expresses his regret over the choice between two things that are very important to him. Vert asks his father what his duty would be if someone else could do it better, to which Jack simply asks him what he's been doing lately. Vert simply explains how he is just racing with the Teku. Jack proceeds to tell his son how he doesn't want him hanging out with them, and that he should stay home until he gets back. He leaves asking Vert to quit what he’s doing.

After Vert Wheeler completes the Ultimate Race and arrives at the Silencerz base, Jack walks up to Vert in his Silencer uniform and takes off his helmet, revealing to Vert that he has been working for them the entire time. Jack announces that they need to talk, to which what happens afterwards is unknown. 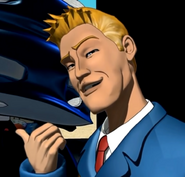 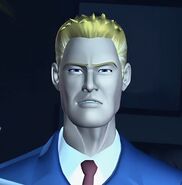