Mark "Wylde" Wylde is a former Wave Rippers driver and is a member of the Metal Maniacs in Acceleracers. He is Kurt Wylde's younger brother. He is voiced by Will Sanderson.

He is a scruffy man with spiked black hair with sideburns. He has a five-o-clock shadow and wears dark round sunglasses. He wears a black tanktop and jeans, plastered with various belts and Metal Maniacs branding. He has a dark blue tribal tattoo on his right arm.

In The Ultimate Race, his left arm is replaced with Racing Drones technology.

In World Race, he is friendlier, however, similar to Vert, he's just as cocky, but he's also not as experienced. When Mark hit Alec Wood and Vert during the 2nd leg, he took the consequence of shame when Lani commented. He's disappointed to know that his brother Kurt was the spy for Gelorum, who had been trying to harm other drivers in order to win and ultimately get the Wheel of Power.

Mark got into prison for 2 years after he and his brother got involved in a shady "business deal". He became hostile towards almost everyone, especially his brother Kurt. He interfered the race involving Nolo and Tork, badly wrecking their cars and took absolutely no consequence of shame. During the race to the old HQ, he knocked Chicane out of balance. He constantly try to get into problems with his brother during the races in the Realms, vowing to settle everything with him.

In the Ultimate Race, Kurt finally admitted that it was actually his fault, he didn't say anything when being confronted to protect his own ego, and ultimately pushing his little brother into prison. Luckily for Kurt, Markie wasn't turned into a Drone like Kadeem, and able to save him at last. Mark Wylde, now more levelheaded than before, with a calmer voice, thanking his brother for saving and finally reaching out, declared them even.

Mark can be first seen driving in Kurt 's Sling Shot performing moves. Kurt confronts Mark to get out of his car after he stops. Mark later begs Kurt to recruit him to his team, he rejects him and drives off. Vert Wheeler recruits him to the Wave Rippers. Mark is one of the twenty-two drivers racing in the second leg.

Prior to the events of AcceleRacers, his brother Kurt got him involved in a shady "business deal", but then backed out on him when he refused to give up. As a result, Mark went to prison for two years and after he was released, he refused to acknowledge Kurt as his brother after he abandoned him and joined the Metal Maniacs.

Wylde becomes the leader of the Metal Maniacs after Tork allowed him to win in a race spanning from the Acceledrome to the Handler Proving Ground and back. However, in spite of this, his members refused to listen to his orders. This causes the team to fall in a state of anarchy for the remainder of the movie. In the Junk Realm, Wylde failed to follow the apex, which at the same time, a wrecking ball launched him and his car off the track, landing in a pile of debris and losing Wylde's sunglasses. He failed to activate his EDR in time because he was knocked out, resulting in him getting trapped inside the realm, and was later captured by the Drones. Flathead Fury got abandoned in the Junk Realm and several hours later Wylde wakes up in the Drones Headquarters.

Still in captivity, Wylde's left arm was replaced with leftover Drone parts. He appeared to be battered up because the drones must've tortured Wylde. Wylde managed to finish off RD Kadeem, who nearly killed Kurt in a fight battle. The brothers use the EDR from the Battle Spec to escape from Drone City, only to be surrounded by more Racing Drones on Earth. The brothers fought through the Acceledrome and escaped inside a hijacked Sweeper before the building blew up into flames. They realize Vert is still missing, and they continue their search to find him.

"The name is Mark Wylde, and when I race, I race!"

"Who's the big brother now HUH?"

"Your brother died in prisons..."

"HOLD IT! Spine Buster's my car! NOBODY drives my car but me!"

"My life's already ruined. Whose fault is that?!"

"You know the first thing I learned in prison...never tell anybody anything!"

Mark in the World Race. 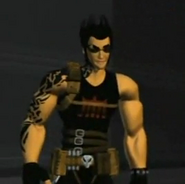 Mark with his new Drone arm 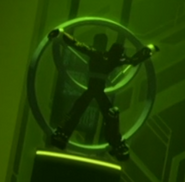 Mark Wylde hung up in the Drones HQ

Mark Close Up in the Drone's HQ

Coincidentially, his cars' situation signify the situations he's in, respectively: