The Metro Realm is the sixth realm entered by the humans, second seen in Speed of Silence.

The realm starts in a sort of underground highway with the cars entering into head on traffic. If one survives the onslaught of realm cars (or finds a way to other lanes) they will emerge out onto an open highway leading up to a black and futuristic city. One has the option of getting off the highway and entering a urban maze while avoiding Kamikaze Semis attempting to kill it, or stay on the highway. Continue staying on the highway, the path will lead the driver to an outer island apart from the city that contains the portal.

As seen from the movie, three islands appear with the big one appearing in the middle. The smaller two sits on both sides of the bigger island: One can be seen early on in the realm, behind the tunnel. The other island can be seen later on, containing the portal. The city featured inside this realm is futuristic, neon-filled and entrapped in a "knot" of highway road. Most buildings have windows that emit a yellow or orange light. Neon signage is featured, having the Wheel of Power insignia. Tunnels are seen within the city. A subway route can be found with an active subway train operating. There is a parking lot that is elevated from street level. An incomplete bridge exist.

The Metro track seem eerily familiar at first, but this ordinary city is devoid of life. Driverless cars and trucks careen down along the deserted streets, hunting racers one collision at a time. -- Official description of the realm card

The appearance of the Metro Realm is hard to determine when the Realm card features a blurred artwork. Artwork from cards such as "Drift & Pass" may suggest that the Metro Realm is a version of real-world cities such as Los Angeles and New York (Hollywood is feature don a sign seen in "Drift & Pass" and Union Square is an actual neighborhood in NYC). The skill card "Shortcut" may feature an urban environment that is reminiscent of a North American city. This can be supported by the official description of the realm card, where the Metro Realm is referred as an "ordinary city". However, this is unconfirmed whether these cards actually depict the Metro Realm. One thing to note that it would be anachronistic if the Metro Realm is an ordinary human city, as the realms were created eons ago. Possibly, the Metro Realm may have been created recently.

Some cards that feature an urban environment like Kamikaze Semis feature a futuristic city like the movie-incarnation of this realm. Unlike the movie version, realm cars are said to appear on the deserted streets rather than the highway alone.

This accelecharger allows a bubble to form on the driver's car that acts to repel any object when in contact.

Tezla's drivers pass through the portal to face oncoming traffic of the Metro Realm. Shortly after surviving them, Taro manages to smash through a barrier and the team drives on the correct lane. Karma realizes that the realm cars have a predetermined route and pattern of traffic.

While racing, the Kamikaze Semis turn on and exit out of a garage. The drivers exit out of the freeway and enter the deserted streets. Nolo and Tork battle afterwards, resulting in Nolo crashing into a column that holds up an elevated rail. Karma, whilst driving, encounters a Kamikaze Semi crashing into her. It destroys itself into a building as Chicane is reversed.

During this realm the drones use the Sweeper for the first time, taking out Synkro and Spine Buster and nearly stealing the Swamp Realm Accelecharger. Luckily, Tork retrieves the Accelecharger and gives it to Nolo. At the defeat of the first Sweeper, Nolo had to take a ride with Karma and Monkey had to ride Hollowback temporarily to head to the bathroom while Tork takes the passenger seat, but unfortunately, Monkey said it was a little too late.

The Metro Realm, as seen outside of the tunnel upon entering.

The Metro Realm upon entering through the portal.

The streets of the Metro Realm.

The portal out of the Metro Realm 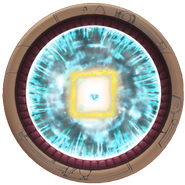 The Metro Realm in the card game

Another Hazard card: The Blown hydrant.
Community content is available under CC-BY-SA unless otherwise noted.
Advertisement