Nolo Pasaro is the current leader of the Teku, and younger brother of former leader Tone Pasaro. He is voiced by Dexter Bell.

Nolo is a young hispanic man with chin-length black hair and brown eyes. He wears an orange and blue jacket, white undershirt, dark blue jeans, and blue shoes. He wears Tone Pasaro's golden T Necklace, which has a piece broken off.

He is confident and has a passion for driving. He has a fierce hatred for Tork Maddox of the Metal Maniacs, blaming him for his older brother's death.

"Nolo Pasaro is the serious and confident 18-year-old leader of the Teku. He was raised in the streets by his older brother Tone. He learned about racing and developed the skills to back up his attitude."[1]

Nolo was orphaned at an early age, and was taken care of by his older brother Tone Pasaro. He grew up on the streets, learning the skills needed to drive.

In the events leading up to the race between Tone Pasaro and Tork Maddox, Nolo requested to Tone that he would race instead. Tone jokingly remarked, "You want to be the leader now, little bro?" Tone departed Nolo with a piece of advice, comparing being a leader to taking a curve in a race. As the race continued, Nolo witnessed as Tone Pasaro oversteered too much into a turn and Synkro crashing into a building, exploding upon impact.

Ever since then, Nolo Pasaro brew a hatred for Tork Maddox, blaming Tone's death on Tork, instead of a mistake caused by his brother. Nolo then presumably rebuilt Synkro, and took the mantle of Teku leader.

Clash on the Coast

In need of help, Kurt Wylde calls Shirako Takamoto and Nolo Pasaro to the Acceledrome.

At the end of the Ultimate Race, he took off Tone's necklace and put it on the Highway 35 sign, serving as a memorial to Tone. 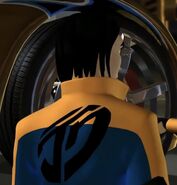