Power Rage was a Teku car driven by member Vert Wheeler, and his second vehicle after his Deora II. It was destroyed in the Water Realm.

The first appearance of this vehicle was after the Storm Realm, Vert can be seen working on the car in the garage before the Swamp Realm opens. It is then focused on numerous times in the Swamp Realm. One of the main times it was focused was when Taro latched on to RD-08 with the spear on his car and Vert was forced to use the Jump Jets on the car to avoid crashing into them. Towards the end of the Swamp Realm, Vert is trying to race the Swamp Monsters and traps to the end, but the rear of the car is impaled by a vine, and lifted off the track. Sad News,The car is then wrapped in vines and hovers about 10 feet above the track until RD-L1 smashes the windshield and tries to kill Vert. After the Swamp Realm shuts down, Power Rage was on it's side and Vert had no use for the car and the steering wheel was detached after the vines was toying with the steering wheel.

Power Rage gets more screen time in the Lava Realm, insisting that Vert had re-built the car in between the Swamp Realm and the Lava Realm. He would've had to start from scratch as Power Rage was abandoned in the Swamp Realm, as Vert escaped riding with Shirako in Bassline through the portal. The screen time Power Rage gets in the Lava Realm is when Taro falls off the track and Vert catches him with the cars grappling hook. Taro's car is overturned back onto the track when a drone car crashes into a lava rock nearby. This is not confirmed, but it is most likely that since Rivited was overturned when it landed on the track, it would be most sensible that Taro rode with Vert for the remainder of the Lava Realm. The last time Power Rage gets screen time was in the Water Realm. It is focused on through the majority of the realm. When the track splits, Vert is the only human driver not to head towards the surface, insisting that he might get lucky. His luck paid off and he finds a hyperpod. He gets in the hyperpod and gets a speed boost all the way up to the surface, where he then rapidly hydroplanes on the surface of the water. He gets over-excited when he says he can "see the portal" and accelerates before going into a turn with water on the track. Accelerating on a hydroplane resulted in him to lose control of his car, and it flew off the track. The car smashed into a coral rock just above the water surface, and exploded on impact. Vert luckily used the E.D.R before the impact. After this incident Vert decided to leave the Acceledrome. This is the last time Power Rage is seen and used. When Vert returns to the Acceledrome, he begins driving Reverb

Power Rage as it appears in Track Mod.

The interior of Power Rage.

Power Rage in the Acceledrome. 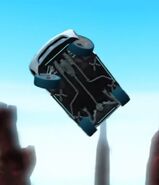 Power Rage in the All Or Nothing card.

Power Rage in the Draft card.

Power Rage in the Pick a line card.

Power Rage in the Shortcut card.

Power Rage in the Spoiler card.

Power in the Traction Control card.