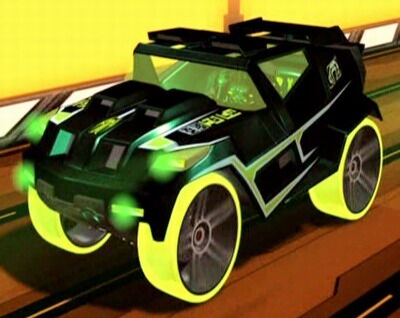 RD-05 is a Racing Drones car used in the series. It seems to replace RD-08 after the Lava Realm, as both are driven by RD-L1 and both are able to transform into the Slam Ram Hyperpod.

RD-05 is first seen in the Water Realm, where it transforms into the Slam Ram Hyperpod and attacks the drivers mid-race. It's driver later orders two RD-S1's to preform maneuver 7 on Taro. RD-05 wins this realm.

RD-05 is seen to be leading the pack in the Metro Realm, until it is ordered by Gelorum to turn around and defend the Sweeper from Tork and Karma. It's driver attacks Tork and Nolo, taunting them with the Swamp Realm Accelecharger, but is destroyed when it fails to notice the bridge behind it. The car was "sweeped" as it crashed into the sweeper, with 3 RD-02s.

RD-05 can be seen once again transformed into the Slam Ram Hyperpod in the Ice Realm. It is ordered by Gelorum to attack Taro, and drives off the track to do so. It is not seen after it destroys the Caterpillar Hyperpod.

While most of the drones turn around to attack the humans in the Cosmic Realm, RD-05 is seen actively trying to win the race. It is knocked off the track by Covelight, right at the last turn of the race.

Retrieved from "https://acceleracers.fandom.com/wiki/RD-05?oldid=12060"
Community content is available under CC-BY-SA unless otherwise noted.