"They can't stop the Accelechargers!" - RD-L1

RD-08 is a futuristic pickup truck-like vehicle that is part of the Racing Drones lineup. It is driven by RD-L1 and makes numerous appearances throughout the movies.

Its first appearance is in the Storm Realm. It turns around to attack the other drivers once the humans enter, then can be seen using the Fog Realm Accelecharger to navigate while backtracking. RD-L1 then finds Monkey and launches an energy ball, destroying Rollin' Thunder. He then enters a Hyperpod and catches up to the other drivers, where he then aids in sabotaging Kadeem.

The last time RD-08 appears in the realm is when it approaches Kurt and Vert in the giant energy sphere towards the end of the track. It uses the Monument Realm Accelecharger to pass in-between them and navigates through the sphere with ease. RD-L1 escapes the crash at the end and goes through the portal, winning the realm. RD-08 can be seen back at the Drone HQ, where RD-L1 is showcasing the Storm Realm Accelecharger.

RD-08 appears again in the Swamp Realm. Gelorum notifies RD-L1 that the Recon Drones are being disrupted by some interference, and that he's going to have to navigate on his own. The next time the car appears is when it is grabbed by a swamp claw. RD-L1 uses the Warp Realm Accelecharger to get his car safely back onto the track.

The next appearance is with Taro and Vert, where RD-L1 uses the Warped Realm Accelecharger to pass them both. Taro then uses the spear on the front of his car to latch onto RD-08, where he then uses the E-Brake to cause both cars to turn sideways and barrel roll along the track. Vert manages to escape the crash with his Jump Jets. The last time RD-08 appears in the Swamp Realm was at the end, where it is engulfed in vines and pulled off of the track. RD-08 is destroyed in the realm, along with RD-L1, when he is ripped apart by a Swamp Beast.

RD-08 makes a brief appearance in the Cavern Realm. This implies that the car must have been rebuilt in the time between the Swamp and Cavern Realm. The car is shown inside of the Drone Hyperpod chasing Wylde and smashing through stalactites. Because of the size of the hyperpod, RD-08 was not able to make a sharp turn and flew off of the track, crashing into a cave wall.

RD-08 makes a minor appearance at the end of the Lava Realm, it was shown going through the portal to win the Accelecharger. This implies that it was rebuilt in the time between the Cavern and Lava Realm.

While RD-08 is not seen in the Ruins Realm, it appears in the flashback towards the end of the minisode, appearing in both the Storm and Ice Realms. RD-05 is seen driving in the Ice Realm minisode, implying that possibly both RD-08 and RD-05 could have driven in the Ice Realm. 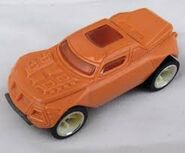