Racing Drones Lieutenant 1 is the second in command of the Racing Drones, next to Gelorum. He is voiced by Mark Oliver.

RD-L1 stands at approximately 8 feet tall. His face is metallic, and has a Y-shaped green visor that can appear over his eyes.

His body is a jet black metal material, with various metal appendages and green tubes. Windshields are attached to his shoulders, blending in with the Racing Drones vehicles. He has green Racing Drones code across his torso and and wrists. His emblem is displayed prominently on his chest and on both his shoulders.

His legs bend in three different parts and end in a giant foot with two giant toes similar in style to headlights.

As the second-in-command, RD-L1(s) is loyal and follows Gelorum’s orders with the utmost precision.

"An eight-foot metal robotic monster, RD-L1 (Racing Drone Lieutenant 1) is Gelorum’s chief driver. He will stop at nothing to claim all of the Accelechargers and destroy his human adversaries in the process."[1]

It doesn't make it to the movies, however, it's known driver is RD-L1, and it has the same ability as his other cars.

Replacing RD-08 after the Lava Realm, RD-05 has a lime green color on most of its part, making it look somewhat mismatching when being inside the Slam Ram Hyperpod.

The car helps RD-L1 winnng the Water Realm and Ruins Realm. One of them is destroyed in the Metro Realm, another one gets knock off the track by the Silencerz in the Cosmic Realm. A few of them are present when the Drones invade the Acceledrome. Ultimately, they are all destroyed when Gig explodes the Drome.

RD-L1's old reliable vehicle. It is first seen at the opening scene of Ignition, when RD-L1 is ordered to kill Tezla. The car helps RD-L1 winning the Storm Realm, and with the assist of a RD-06, ultimately capturing Kadeem, and obliterate everything behind him. It is totaled in the Swamp Realm alongside its driver, and nearly lost 4 Accelechargers because of the incident. Its final victory is in the Lava Realm, when the car was rebuilt alongside its driver. 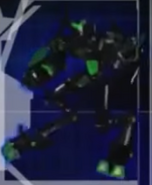