"Let’s pump up the bassline!"

Acceledrome Crew and all other drivers

Shirako Takamoto is a Japanese member of the Teku team as well as its cool, calm mechanic, and has a passion for music. He was voiced by late Kirby Morrow.

Shirako has orange-tinted glasses and tall bluish-black hair. He sports a white vest with a black and orange T-shirt under it, and a white undershirt below that.

Shirako Takamoto drives in style, reflecting his passion for music. He rarely talks, often only speaking in single sentences.

"Shirako Takamoto is serious about his look, his car, and especially his music. He takes much pride in his car’s audio and video systems as in the spectacular moves that he demonstrates while racing."[1]

The first time Shirako is seen is at the coast race between Nolo Pasaro and Tork Maddox, the leaders of the Teku and Metal Maniac respectively. Although, he is not given a proper introduction until the aftermath of the Storm Realm, where he is loudly blasting music and bright lights as he navigates the stone maze outside the Acceledrome. Later, while he is "Teku-izing" Kurt's Battle Spec, he attracts the attention of his Metal Maniac rival, Deezel "Pork Chop" Riggs. Porkchop insults him, but Shirako ignores him and turns up his music on Bassline causing the tires nearby to dance. This all ends when Karma turns his music off to alert everyone of the Swamp Realm opening.

In the Swamp Realm, Shirako encounters one of the giant mosquitos which lands atop his car lifts it several meters in the air. Shirako, annoyed by the out-of-tune buzzing uses the massive speakers on the back of Bassline to repel the bug. It drops him and he continues on the track as normal. At the end of the realm, Shirako arrives after Nolo wins and pacifies the swamp monster. He picks up Vert Wheeler, who had his car destroyed and exits the realm.

In the Cavern Realm, Shirako seems to be more of a detriment to his fellow racers than a help. First he blinds Pork Chop by using Bassline's multi-colored lights. When Pork Chop retaliates with a slam to the side of Shirako's car, he turns up his music, resulting in the sound waves bring down stalactites onto the track. Lani warns him of this, but he fails to hear her. Toward the end of the realm, giant bats attack the racers. Kurt tells Shirako turn up his music so the bats would not be able to navigate properly. He finishes the realm second, after Pork Chop, and is still listening to his music, much to Pork Chop's chagrin.

In the second movie, Shirako participates in the Water Realm. In this realm, he spends most of his filming the exotic sea life and fights between Wylde and Kurt for his website, rather than focusing on the race. When the Racing Drones catch up to the humans during the sea level end portion of the realm, Shirako is hit by RD-L1's Ram Hyperpod and is sent flying off the track. Shirako uses the Swamp Realm Accelecharger to get back onto the track.

In the Cliffside Realm, Shirako claims to have a problem. He says that he cannot access the Internet for new music. He opts to play his old beats louder. This annoys Lani, who wonders if he knows that he can damage his hearing listening to loud music. Nolo apparently told him about this, but he acted like he did not hear him. Fellow racer, Kurt Wylde, sees a Drone sweeper driving the opposite direction on the track and tells Shirako to stay behind him. Kurt uses the Swamp Accelecharger to avoid the sweeper while Shirako follows. On a later section of the track, a sweeper drone gets under Shirako's car and begins cutting through his Nitrox 2 tank.

Lani tries to warn him that if he uses his booster, his car will explode. Kurt says there is only one way to stop Shirako. He uses his booster to catch up to Shirako and knocks him off the track. Shirako uses his E.D.R. to escape the realm.

During the time between the Cliffside Realm and the Neon Pipeline Realm, Shirako begins rebuilding his signature car, Bassline, and a Teku motorcycle called Nightlife. He appeared to be bothered by Lani Tam saying the fact that Pork Chop was also building a motorcycle, Jaw Jammer (which is a Metal Maniacs' name for the Hot Wheels Airy 8 in reality).

In the Pipeline Realm, Shirako is rarely focused on except when a pursuing racing drone blasts his motorcycle from under him. The drone is about to kill him when a Silencer, disguised as Monkey and his Rollin' Thunder, destroys the drone and the RD-07 at the same time! The Silencer then shines his head lights at Shirako, blinding him and distorting his music. Dr. Tezla drives up behind the Silencer and uses "intense polarized light" from his Nitrium's headlights to break the Silencer's holographic camouflage. The Silencer's car divides into halves and transform into twin motorcycles, or Magnesiums, and drive away. Shirako remarks to all of this as "Cool."

Sometime between the Pipeline Realm and the Junk Realm, Shirako finishes building Bassline and takes it into the Junk Realm. In this realm, he and Kurt work together to take out a sweeper. Shirako is the first to see the sweeper and tries to tell Kurt to turn around, but some sort of interference (possibly Silencer) is jamming is comms. The sweeper chases the two racers, launching sweeper drones. One gets under Bassline and begins tampering with it, but Shirako scrapes it off before too much damage is dealt. A moment later, the super magnet begins pulling up junk from around Kurt and Shirako, but they increase their speed to avoid it. The sweeper chasing them gets caught in the magnetic wave and launches motorcycle drones before being carried to the car crusher. During the final portion of the Junk Realm, a motorcycle drones is hit by one of the massive wrecking balls. Its legs land the hood of Bassline. Shirako exits the realm and gives the legs to Monkey as a gift and for the legless Sparky.

Shirako is one of the six drivers to be permitted by Dr. Tezla to enter the Cosmic Realm. While in the realm, he takes advantage of the low gravity to perform fancy maneuvers with the turbo jets such as: doing a barrel roll over Pork Chop or barrel rolling out of the path of an oncoming sweeper. He is also used as a weapon by using his loud music and speakers to destroy drones. One drone manages to pull on of Shirako's speakers off on the left of his car when he uses them to throw the drone off his car. Shirako is angered by this as he isn't too happy about it.

In the Drones' Headquarters, Shirako accidentally crashes his car against the side of the sweeper trying to avoid incoming fire from the drones. He spins out and flips his car upside down. Tork sends Pork Chop to pick him up. Shirako casually waits by his car, even as drones bear down on him, when Pork Chop slams into them and tells him to get it. Shirako, Monkey and Pork Chop are the last humans to exit the Drones' HQ using the E.D.R. The drones surround the drivers when they exit the portal, but Vert, who returns as an Acceleracer, clears the way for them. During the fight, Shirako can be seen kicking a drone off its feet. The drivers steal another sweeper and Shirako slowly walks toward it. He is last seen walking into the sweeper in the same fashion when the drivers gather next to the Highway 35 signpost. 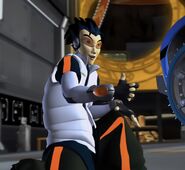 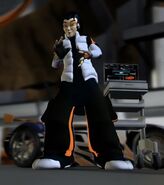 “Yo, let pump up the bassline!“

“If you're gonna buzz, Buzz in Tune.”

“Gotta a problem here, I can't get on the internet, I was gonna download some new tunes, I'll just play the old one out loud.”

“Yo, something's messing with my tunes.”