Slingshot was a car driven by Kurt Wylde in Acceleracers: Ignition and World Race. It was Kurt's from World Race and was repainted in Teku colors.

It was driven in the beginning of Ignition and was later destroyed at the end of the Storm Realm, when it hit a drone car, flipped over, lost a wheel, and shattered the windshield. With only a few minutes to go, Kurt had to abandon Slingshot in the Realm. 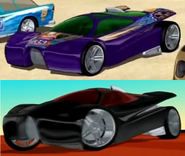 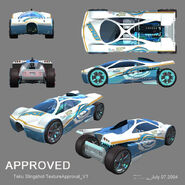