Acceledrome Crew and all the drivers

Ultimate Race
Sparky is a former RD-S1 that followed Vert Wheeler through the portal of the Storm Realm portal, and ultimately reprogrammed by Monkey.

He looks like pretty much all other RD-S1s, but was heavily damaged by the time he reached the Acceledrome. He tried to kill Vert but was deactivated by Karma with her Chicane.

He was reactivated and was locked inside the Acceledrome's underground Garage. It seems like he recongizes Karma as Gelorum, due to their resemblance. This is confirmed by Kurt Wylde, who also said that Karma somewhat looks like Gelorum.

He is put on a car chassis (that is about to become Flathead Fury, since the resemblances are recognizable) that Karma likely borrowed from Mark Wylde), in order to help Karma mimicking its driving abilities, hence recognizing the skill required for each realm the drivers went into, as well as acknowledging the Drone's remarkable precision when driving.

GIG is wondering why Dr. Tezla is still inside his lab, as well as something that went wrong in the room's security camera. It turns out the Drone has found a way into the lab, sabotaging Tezla's exo suit in order to take the legs part, replacing the ones it no longer has, as well as hacking his device, sending its current location to the Drone HQ. It also tried to steal the earlier car chassis which was spotted by Markie, and luckily he was able to stop it (despite the chassis was reaching over 200mph when he was trying to hold onto), partially saving the Acceledrome from being revealed and Tezla from being once again immobilized.

By this time, the Drone has been reprogrammed to Sparky by Monkey. He's still missing his legs due to the earlier incident. He accidentally sprays lubricant into Porkchop's face when Monkey is telling him to lube the latter's Jaw Jammer. He served as the starting light gate for the race for power between Tork and Wylde. Some time between the Pipeline Realm and the Junk Realm, Monkey taught Sparky how to make Nitrox 3,5, which makes Lani question him critically. He also accidentally destroys Jaw Jammer, according to his creator. Later, after the Junk Realm, Shirako brought back a pair of legs from MD-01 for Monkey, which completed Sparky's physical appearance.

He is curious and quite helpful around the Acceledrome. Usually says "Hello" all the time. However, he should never be allowed to go near cars, EVER. It leads to horrible consequences.

Sparky first appeared in Ignition, as the top half of a Racing Drone that came through the portal with Vert in the Storm Realm.

During the Cliffside Realm, the pre-Sparky drone steals an incomplete version of Flathead Fury, ultimately being stopped by Mark Wylde, who was still in the Acceledrome when it happened.

”Awesome!” - In the Ultimate Race. 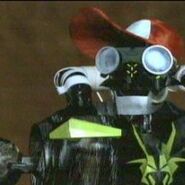 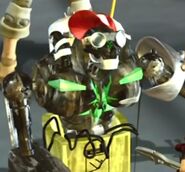 The pre-Sparky drone being stopped by Markie.

Pre-sparky drone waiting for the Deora II to pass.

Pre-sparky drone climbing on the side of the Deora II.