Finding the line with the best traction

The Swamp Realm was the second Realm the humans entered. It marked the debut of the Drill and Caterpiller Hyperpods. This is the first realm won by the humans.

It's alive! This organic track sprouts from a fetid Swamp and winds up around lowering trees, growing and branching faster than the cars that race on it. -- Official description of the realm card

The track starts in a forested area surrounded by tall trees. The track is the normal orange track, but it is covered with vegetation with a single line not covered with mold. The mold causes less traction to those who drive on it. The track is told to be organic in the card game, growing about. Populated in the realm, there are beasts and bugs. Most notibly, there's a Behemoth Mosquito that is about the size of a car and will attack drivers inside the realm. There's a Swamp Beast at the end of the track, guarding the portal. It will come to life once a driver approaches it. It has vines to constrict any drivers.

The skill for this realm is to stay on the best terrain given. This means to avoid the vegetation that found on the left and right of the track.

This accelecharger will enable the driver to grow an organic road.

The drivers enter the realm and spawn out amidst huge trees. 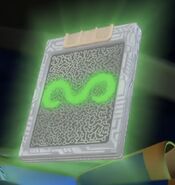 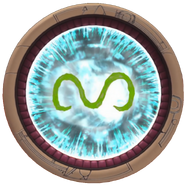