”I used to be the best. Maybe I can be again.”
—Vert Wheeler

Nightlife (abandoned after being destroyed)

Josef "Vert" Wheeler is a former World Race driver and the main character of Acceleracers. He currently races for the Teku. He is voiced by Andrew Francis.

Vert is a young white man with spiky blonde hair, blue eyes, and a goatee. He wears a dark blue tanktop, a white jacket with blue highlights, all branded with Teku logos. He wears dark blue cargo pants with light blue highlights and white shoes.

A prominent skateboarder and surfer before he became a racer, he is often very cocky and overzealous. He is a skilled driver, winning the World Race and the Ultimate Race although doubting himself in between.

The Ring of Fire

At the beginning of the film, Vert is seen skating with his best friend and rival, Alec Wood. After Wood fell off from his skateboard, Vert told him to try surfing. Alec had a tough time choosing what he wanted to do. After the conversation, Vert headed back to his home to ask his father to take his car for a drive but his father refused because he was heading to work. The conversation between Vert and his father became and argument. His father told Vert that if he wants to drop him off at the DMV. (resolution needed) After Vert made success on his driving test, he went home. As Vert was skating back home, he suspected an unusual vehicle parked in front of his house. As Vert checks out the vehicle, the vehicle starts itself and opens an automatic door. Dr. Peter Tezla appears in a screen and complains that he is looking for new drivers and told him that he has been chosen to take part in the World Race along with 34 other drivers. Tezla then reveals the location of his cube in a GPS screen. As Vert drives in the desert, he finds the big gray cube with red fire lights and enters the building. He finds 9 other drivers. Dr. Tezla then explains the history of the Accelerons and then says that he will give the winner and the winner's team 5 millon dollars. Before the race started, Vert and the other 4 drivers had to test their vehicles abilities. After 3 cars tested their abilities, Vert and another Wave Ripper, Lani Tam told him that they should be a team. Before Vert used his jump jets, he says that he is a team of one. Then he uses his jump jets while Taro spectates like Vert is stupid. Then Vert and Taro take a drive in the desert road. Vert accidentally used the wrong button which shot a grappling hook and hooked on a rock. Vert and Taro's vehicles got out of control and Vert's car hits the sign of Highway 35. Before the 1st leg had begun, all 10 cars and drivers had to line up at the start, Tezla explains that if a vehicle reaches 300 mph, a portal will be opened. After Vert powers the Nitrox 2, his vehicle reaches the 300mph and the portal is shown. After all 10 vehicles arrive at the First Leg, they discover rocks, a planet, and an orange sky. After Banjee failed his attempt on the loop, Vert raced passed him and started to make an attempt on the loop. Vert then uses his skills as a skateboarder to build up speed. He makes the comparison to grinding a half-pipe. After he successfully makes it past the loop, he ends up with Taro and the two began hitting each other's cars, both ending up off the track. While Banjee and Kadeem raced together, Zed-36 ignites and throws a bomb disguised as a Nitrox 2 booster, causing a wave of lava to submerge and destroy the tracks. Vert was able to get past the lava by using his jump jets equipped on his Deora II. While racing with Banjee, Vert gets alerted after Lani yelled that she needs help. Vert and Taro started helping her with their cars' grappling hook. Vert used Deora II's jump jets to get her back on the track. After Kurt won the first leg, Vert, Taro, Banjee, and Kadeem were chosen to be team leaders for their racing teams. After Vert says he will still keep racing, Tezla reveals himself and explains what is waiting for them in Highway 35.

Vert introduces Alec Wood to Lani. Vert later finds Kurt's Sling Shot performing drifts and spins. He noticed it wasn't Kurt because Kurt can be seen with Banjee, Rekkas, Toño, and Mojave. Kurt aggressively told the driver to get out of his car, and the driver turns out to be is his younger brother, Mark Wylde. After Vert asked a question to Mark, he introduces himself. After Kurt rejects Mark from the Street Breed, Vert recruits him to his team and he was given the Corvette Stingray. In the second leg, Vert can be seen with Alec Wood. Mark goes in between them and goes out of control. A few scenes later, Vert and the three Wave Rippers notice that the Road Beats took a shortcut. After a discussion, Lani, Mark, and Vert take the shortcut to catch up.

After talking with Kadeem about the condition of his village, he realized he never really thought about what other people want. After this change of heart, he continued to race and eventually wins the Wheel of Power. After receiving the prize money, he gave his check to Kadeem.

After Tezla wouldn't give the World Race drivers more Nitrox 2, he left and became a street racer in the Teku along with Kurt Wylde. Vert still believed he was the best, and even better than the leader of the Teku, Nolo Pasaro.

Vert tries to convince Nolo to let him race Tork, but Nolo declines. After a short dispute, Nolo begins the race against the Metal Maniacs. Vert meets Gig and decides to postpone the race. Vert along with the Teku and Metal Maniacs drive to the abandoned Tezla's Cube and Vert reunites with Kadeem. Kadeem leads them all to the Acceledrome and is briefed on the state of the Wheel of Power and the rising threat, the Racing Drones.

After multiple failures Vert begins to doubt himself, and decides to quit. He drives back to his home on an Vert’s motorcycle. After some reflecting and a conversation with his father, Vert returns in Breaking Point just in time to race in the Junk Realm.

After he injures his leg in the Ruins Realm, Vert chooses to stay in the Acceledrome instead of helping the others save Markie. This turns out to be a good decision, as Gelorum obtains all of the AcceleChargers and begins the Ultimate Race, and being the only driver on hand, he has to go into the realms after her. Gelorum ends up reaching the Sphere first by a slight margin, but the Acceleron at the end of the track says that because Vert used only his skills to drive in the race, that he is the real winner. The Acceleron then makes Vert an Acceleracer and flips Reverb back on its wheels. Vert chooses to go back and find his friends instead of going with the Acceleron (much to Dr. Tezla's dismay), and the Acceleron gives Vert all of the Accelechargers along with the wisdom circle. Returning to the Acceledrome, Vert helps the others fight off the Drones and manages to escape before the building collapsed. However, when Vert enters the portal to go back home, he arrives mysteriously at the Silencerz headquarters, and is subsequently captured by them. There, he learns that the lead driver for the team is in fact his father. Although fans have been speculating various theories, Vert's fate still remains unknown to this day. 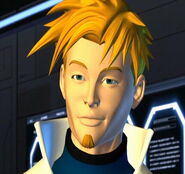 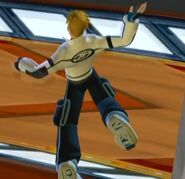