The Water Realm is the 5th Racing Realm shown and the 1st realm of Speed of Silence.

Drivers are sunk to a jellyfish-like structure that grows an air bubble around the top to enclose the cars. The bottom of the structure opens to let the drivers fall to the track below. The track is encased in a glass tube underwater, and periodically has holes in it, which do not flood the tube. Drivers can hydroplane over the surface to stay above the water and on the track. Large skeleton fish that resemble angler fish swim freely in the water surrounding the tube, and sometimes break in it. There are multiple splits in the track and sometimes it is surrounded by colorful sea life such as coral. Eventually the track leads upwards onto the surface and loses the glass tube and has drivers maneuver around seaside cliffs. The track dips and turns so that the surface is underwater, and drivers need to hydroplane over the water correctly or risk crashing into the rocks. 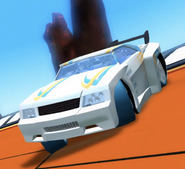 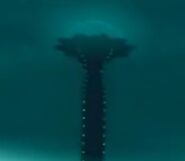 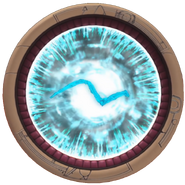