”The Drone’s tires are holding up way better than ours! I gotta take one back with us.”
—Mitchell “Monkey” McClurg

Lava Realm
The Wheel Treads are various types of treads for Dr. Tezla's racing teams' cars. Dr. Tezla reverse engineered them when studying the Racing Drones’ tires. Not to be confused with the treads from World Race.

After Monkey took a look at a Racing Drone's tire during the Lava Realm, he took it back to the Acceledrome to figure out how the Racing Drone's tires were able to handle the uncontrollable conditions in the Realms. Dr. Tezla then fitted them to both the Teku and Metal Maniac's cars in Speed of Silence, the second movie.

The Wheel Treads consist of various types of treads and are made for specific forms of terrain, such as spikes under the surface for ice, slick treads for better speed, off road tires for rough terrain, and water treads for passing through water smoother. The Wheel Treads change when the user presses a button or flips a switch.

This type was used in the Water Realm in order to prevent hydroplaning.

Originally created by Doctor Tezla for use by the Dune Ratz, it was later adopted by the Teku and the Metal Maniacs when Monkey took the racing drone tire technology from the Lava Realm.

Used originally by the Scorchers then later the Metal Maniacs, this type covers all four wheels in a metal encasing, protecting it from the elements and rocky terrain.

Rivited in the Ice Realm with Tire Spikes.

Rivited using the armored type in the Lava Realm. 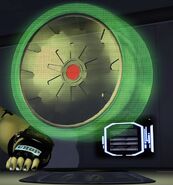 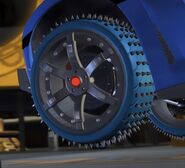