The third story explores Kadeem of the Dune Ratz and his motivations of winning the world race to get the prize money to help his people that are struggling without food and water. An old wise man named Hasis tells him he’s in great danger before the 3rd leg of the race starts the next day. The 3rd leg of the race takes place in a desert and the start of the track is buried in deep sand that has no traction for any of the vehicles with normal tires. Luckily, Kadeem and the Dune Ratz had spiked sand tires to drive through it. Vert and the Wave Rippers also use their jump jets and aim them down at the sand. They use the dune of the sand like a wave to fly over the sand while the other drivers are stuck.

Kadeem exits the sand dune first and drives ahead until he sees a huge dinosaur statue. He stops to look in awe at the Acceleron's creation when his teammates Chuvo and Rekkas both pass him. They enter the dinosaur through its tail and take a jump out the front of the mouth where they come up short, but Kadeem uses nitrox 2 and is able to make it after. The other drivers have finally made it out of the dune when Kurt changes into Zed-36 when they’re inside the dinosaur and uses Nitrox 2 to make the jump. Similar to the 2nd episode where Alec passes Zed-36 and wonders who he is, Chuvo and Rekkas look at the car and wonder who this mystery driver is.

Kadeem comes up on some pyramids when he sees an object shining on top of the tallest pyramid and thinks it’s the wheel of power. He has to get out of his car in order to retrieve it which allows Zed-36 to catch up to him when he sees something that he thinks must be the wheel. He uses his height advantage to launch an energy blast at Kadeem which knocks him off the track. He uses his spikes on the pyramid to get back onto the track. Zed-36 uses Nitrox 2 to make a long jump to catch up to Kadeem and knocks the wheel loose causing a wild goose chase ending in exposing Kurt as being a spy.

Up ahead, every other driver knows that this object is not the wheel which results in Banjee winning narrowly over Taro, but this is still not the end of the world race. Kadeem beats Kurt 1 on 1 and leaves to finish the race. When he gets through the portal, he finds that the object is gone and wasn’t the wheel. That night, Vert talks to him and finds out that he was the one that turned in Kurt Wylde. He then finds out about Kadeem’s people; it’s left very vague like a lot of points in the movie, but Vert now sees why someone else could be racing and not just him which is a turning point in his character. Hasis tells Kadeem that the greatest danger was to see only what he wanted to see; not what is true. Where he went wrong was that his people needed the money the most when they really needed him to lead them above all. He wakes up as the morning sun rises and realizes that the old man wasn’t telling him anything, but that he was telling himself that he needed to be a leader for his people. With that, he stands up and looks across the water and into the horizon and would leave to help his people at the first chance he got. 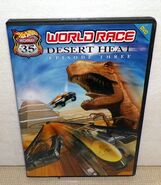